skip to main | skip to sidebar

Juz back from the CNY break, we started our show on 5th of the lunar new year!! OF cause as usual, during this CNY period the whole performace cast will sing our CNY songs b4 the show (our XYL tradition) . Something funni to blog about our CNY show. Its a funni show!! cause got 4 joker!! can see from the pics below!!! Have a FUN time seeing the pics!! 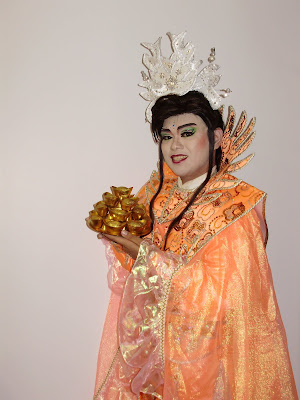 In this month, we had this cute little guest..she is ah ru, ah xio's daughter..realli cute girl but very naughty ..haahaa
see pretty?

Then on one of the night we acted luo sheng, which had the 7 step poem..by cao jian..

Once again due to audience request, we bring back the show about youjiakuay...This story is a very sad story.It says about this poor family in the village which lives 3,a mother and 2 sons.The elder son leaves home and go earn money in the capital and eventually started a fabric business. One day, his servant bring him to this brothel to listen to ladies singing. In the end, he fell in love with this singer, however this is actually a trap by the servant n singer as both of them already got affair and they simply just wan to cheat away all his money. Who knows this guy fell in love with the singer n ask her for marriage. On the other hand when he is rich, he fetch his younger bro,a retard, to stay with him while the mother wish to stay in the village, ancestor house. Things start to happen when the guy went on long business trip, the wife n the servant was having affair in one of the room and happen to be met by the younger bro. Both the adulterers were afraid that the retard would leak out words to the elder bro so they set up trap by forcing the retard to smoke opium. In the end the retard got addicted on opium and had to beg for more drug. In the end with the return of the bro, seeing the younger bro learned all the bad things he was dissapointed. To make things worst, the wife make a fuss that the younger bro in law wanted molest her. Thus the elder bro in anger wanted the servant to pass him a wooden rod to hit the bro to teach him a lesson to wake up from his idea, however the servant passed him a axe. In the end, without any notice he accidently just slash across the neck and killed the younger bro. Being afraid and devastated, he then did a funeral for the bro and buried the corpse under the bed. As the retard became a vengeful ghost and he goes all the way back to his old home and appear in his mother's dream telling his mum that he is death n suffering. Thus the mother was very sad n curious worry for the son she went all the way to the capital to find her older son. In the end she found out her younger son was dead and she went to find official to address her redress..The elder son was brought to justice by chopping the head. When the son was about the be killed, the mother regretted and wanted to withdraw her case but it was too late and the mother cried in agony.

The mother..we 2 extra haha we are only the servants..

The part you jia kway was slashed on the neck and blood was spurt out from the neck. As can see from the face where he was a heavy drug addict.

His wandering spirit was on the way back to the home to find his mother.
Ps: When the photo was taken, it was seen in the photo that there are many orb around. It is believe that such orbs are actually spirits flying around. Esp during such Yin scence, it is also believe in the opera that ghost or spirits would usually gather around.

The spirit call the mother...

In Lunar august, we got quite a number of show lol...

First is our Geylang lorong 30... Acted 2 days.. but only got foto which i acted as the god of wealth!!

I see i shall juz briefly blog through this month's happenings...
Basically in this month, we do not have much big opera, mostly are all 7 pl troupe (七艺班) or puppet show (掌中班/布袋戏). When i see our schedule, i was thrilled as this month's show can relax liaox...cause small troupe i always got no worries as i need not rush as our show starts at 8pm so can take my time to make up etc...heehee..furthermore for puppet show i am even more happy, no need make up etc juz need to sit behind the stage and sing and hold puppet niahx(never take photo for puppet show lolx).... Whoo...I see god light in the month... a relaxing month..
This is the show in sembawang..this 7th month celebration is very big...organised by the block of companies there...by a few hundred companies! we got 1 week show there... 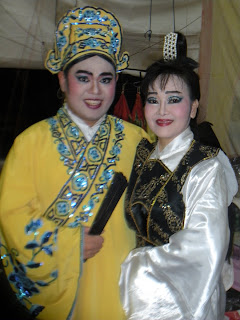 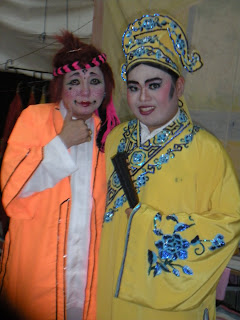 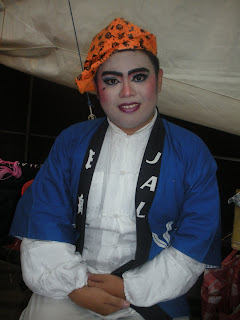 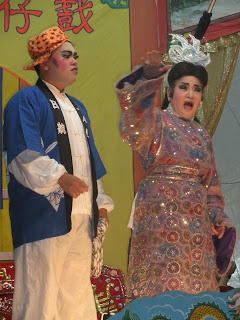 Next destination is our favourite west coast temple...first day went there to sing puppet show and next 7 days all small troupe..fun...
Then this photos is the show i taken at telok blangah where i acted as a sick man... 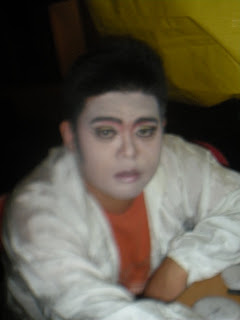 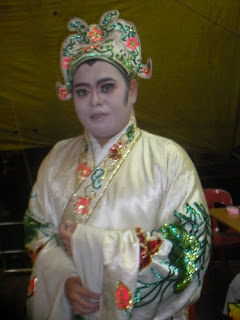 There is a short video taken...the background abit noisy..haahaa
Posted by DaRonn at 4:01 AM 2 comments:

Alot of pl had been asking mi why there are no update in my local and taiwan blog!!!!

Sorry for not updating my blog...I had been very busi with work and performance!! FInALLY in this month i get to take a short break cause i dun have much show!!! :p

I promised to update once i got time and will start from the lunar 7th mth performance...cause i ended my post in lunar june...hahaa
Posted by DaRonn at 3:53 AM No comments:

Posted by DaRonn at 9:52 PM No comments:

DaRonn
Im juz a simple boy who loves opera and chinese culture..hope to find friends who lyk have the same interest...